MARK TWAIN AT THE PLAYERS

The play is called Mark Twain at The Players. We have changed dates to protect the innocent. The play is a fictional story narrating fictional events, but is loosely based on the lives of the characters depicted. All the works are fictional and are not works of the writers depicted. The play has no connection to or endorsed by any of the depicted writers, their estates, descendants or administrations.

Mark Twain suffered deeply in his last decade. This play is about the first two of ten years of his last decade. Though he was a grand, great, and loving man, he lost close friends and family, his support system. When he fought with himself and his demons, his wife Olivia supported him. But he lost Olivia and two children in the last ten years and the demons returned. In the end he fought Satan himself! Twain won the battle. He died a believer, outwardly Presbyterian and inwardly as a pantheist. Yes, he and Tesla spent many serious hours together and included in the talks was how close time-space theory was with Buddhism.

Mentioned is Twain’s slightly inhabited by a spirit he had the twins. An example is the writing about a boy named Buck in the adventures of Huck Finn, his most popular character and novel. He looked like Huck, was the same age, and they even had the same thoughts and ideas. Twain wrote Buck in his greatest story and took him out of it in one chapter and two days.

Another sub-plot of our story is to advance space-time travel. Hence, Nikola Tesla and Twain became close friends, and whereas humanity went back in time in the days of *A Connecticut Yankee in King Arthur’s Court*, in *Mark Twain at The Players* the focus is to send people forward after getting access to space-time travel.

From the Connecticut Yankee the following, our favorite quote:
“Bridgeport?” Said I, pointing.
“Camelot,” said he.
It can’t get proven, but Tesla collaborated with ideas at the very least. It’s likely worth a book or two. Here’s a play for you to consider.

Finally, the most important truth of Sam Clemens' life is that it took a full and hard life to rid himself of the worst kind of plague, the plague of the soul, which is only attracted to white men. So the thread we weave is two staggered times as Samuel Clemens changed from white bigot, whose family owned slaves, to become a radical against slavery. The moment he did, it was when he had joined the confederacy and, for two weeks, he marched North toward the fighting and after those two weeks; he turned West and then marched almost three thousand miles to get to his freedom. He’s been marching to freedom for all beings since. 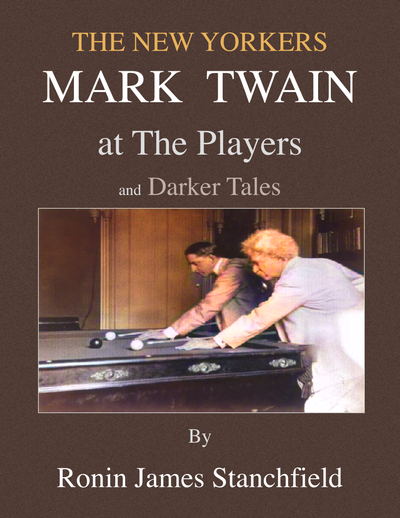